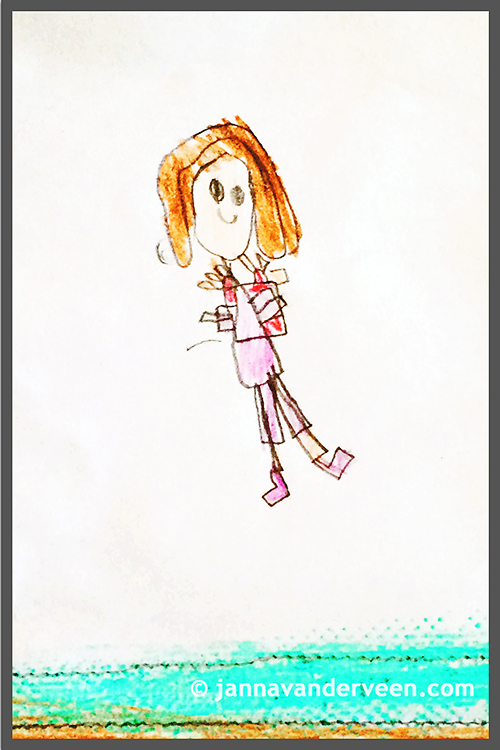 The unhindered imagination of children produces the cutest things.

Yesterday, my five-year-old daughter created this drawing of herself, with brown hair (she’s convinced that’s the color it will be when she’s older), and a red, rocket backpack. But most notably, she’s flying.

At Disney World,  a shop assistant sprinkled fairy dust in my daughter’s hair and promised her that if she made a wish, it would come true. You can imagine what I was thinking as she spoke, my eyes large as I subtly tried to dissuade her from delivering this promise with a not so subtle shake of my head.  But the worker didn’t see me,  or maybe she just didn’t get it, and my daughter latched on to the thought with whole-hearted abandon. She confided with great confidence, that she wished to fly.

As the day progressed, her questions grew more frequent… “Mom, am I going to fly yet? When is it going to happen Mom. I want to fly now.”

To which she’d shake her head and stomp her foot. “That doesn’t count. I want to FLY.” An eye roll invariably accentuated her disdain for my suggestion.

Eventually I had to tell her the truth, and in doing so, I broke her little heart.  My explanation, that the  wish was make-belief and pretend, was met first with denial and then sadness. “But I want to fly Mom, I have fairy dust in my hair.”

Many more distractions followed and a lot of hugs. Thankfully, she forgot about the promise and her wish.

Or so I thought…

Based on this picture, I’d say she hasn’t given up on her dream.  Now she sees it as a challenge. Perhaps she will be instrumental in creating the next flying device designed for public transit. Or maybe, in the absence of that type of futuristic technology, she’ll develop her own fantastical world on paper, and live vicariously through the stories of her characters.

Either way, her curiosity and creativity are inspiring.

And, based on her character’s smile, I think I’d like to fly too.

Sign up to receive e-mails regarding book news, special giveaways, and author announcements.

If Penelope were to make a drawing for us for Easter what would it look like? I figure it might be pretty simple:  Easter eggs, and smiles! Then again, who knows.  If she were feeling particularly imaginative, almost anything could end up on the paper … 😉 But for now, here is an Easter smile […]